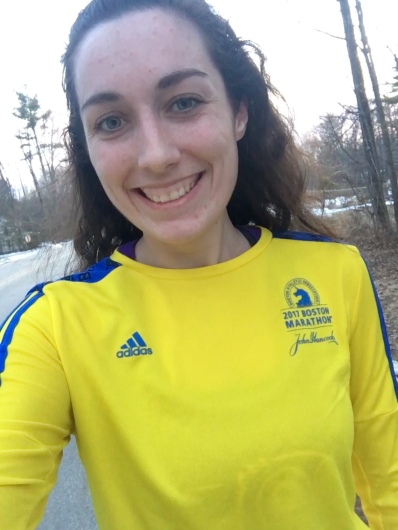 How many years have you been running?
4.5 years

What made you start running?
I used to look at lists of 5Ks and just *wish* I could run one during the summer. I was an athlete back in high school and was a great runner (even though I hated it). I inconsistently ran 2 miles when I went to the gym in college, but then settled into my desk chair and did nothing active after graduating. I decided to start with Couch to 5K and thought it was TERRIBLE. I made it a couple weeks and quit. Then I made up my own plan, which consisted of running as far as I could (which was about half a mile) and then walking home. I did this as many days of the week as I could, not letting myself take more than two days off in a row. For some reason I started this process in the winter with terrible weather and snow, but within a couple months I made it to my first 5K: the Snowflake Shuffle. (Well 3 miler, but close enough!) I was hooked! I knew no one, but I had a blast.

What keeps you motivated to continue running?
Immediately after the Snowflake Shuffle I signed up for a charity training group to run my first half marathon (Team Challenge New England). I was terrified, but that really kept me focused and committed to running during my first year. Within 10 months I went from running half a mile to my first half marathon. After that first year I have really fluctuated between shorter distances, longer distances, and barely running at all! Sometimes I want to cross train more, sometimes I want to be a blob on my couch 🙂  #honesty

What do you do when you are not running?
My main hobby is watching too much TV with my dogs laying next to me. I love coaching Girls on the Run, as well as working water stops for them. Anything where I can dress up like a lunatic and ring a cowbell is super fun. So Ragnars and GOTR are my jam. I occasionally garden and grow my own veggies (I plan to take that up again this year). I occasionally do aerial (want to do more of this again!). And I usually hike some local trails with my husband and dogs on the weekends.

What was your first race?
My first race after sticking with running was the Millennium Mile in 2014. I did run a trail 5K at some point in the year before that. It was fun, but I didn’t stick with running at that point. I think I’ll go run that race this year if I’m not booked! Blaze the Trail 5K in South Hampton. Proceeds go to the PTO.

What was your favorite race?
Vulcan’s Fury trail race at Pawtuckaway. I almost chickened out on this race again, but finally made it last Fall. It was awesome. I think more trail races are in my future. I met up with a SRTT friend before the race and we ran the 5ish miler. (Hi Karen!) It started out pretty packed on a tiny trail, but as we ran everyone spread out and I was soon alone in the woods. People cheered me into the finish even though not one person there knew who I was. There were tons of free snacks and it was 2 miles from my house. Can’t beat that! This year I plan to do the half marathon!

Most memorable run?
The night runs of Reach the Beach. They are both terrible and beautiful. I have seen the sun set and rise and it is amazing to see both ends of night, but I also thought I was going to succumb to my stomach cramps each time.

Why do you love SRTT-NH?
Everyone is so supportive and welcoming both online and in person. I didn’t go to many (or maybe any) group runs before training for my first marathon in the fall of 2016 and I was silent in the Facebook group. I really leaned on the group to keep myself accountable and get more training done for the marathon. Now I enjoy commenting on tons of posts, setting up group runs in this neck of the woods and crossing my fingers that some of you come! Now we just need a good donut/smoothie place around here to meet. I am crossing my fingers that HippieCakes Bakery opens soon! I also love driving to other towns to meet up with the friends I have made online.